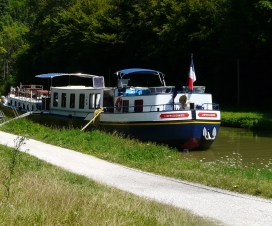 The owner and friend of some of our lovely barges explained in detail the names and their meanings. We found this very interesting and we hope you do as well.

What’s in a Name? As Shakespeare once said, “what’s in a name?” - well, actually quite a lot as far as the names of our hotel barges are concerned. Some of our names hark back to the origins of the vessel whilst others evoke images of the essence of our cruises and the regions we pass through.

Let’s start with our first barge, the grand old lady of the fleet “Anjodi”. Before she was transformed into a charming hotel barge, she was a working cargo boat, owned by a captain with three daughters - Anne, Joanne and Diana - hence the doting father naming the barge after his children - a name which has stuck ever since.

By contrast, “L’Art de Vivre”, “La Belle Epoque” and “ La Renaissance” are all named after images of French style, culture and good living, of which we hope our cruises will give you a real flavour. The Belle Epoque (the beautiful age) and the Renaissance (the rebirth) were both celebrated periods in French history - and in addition, the renaming of Renaissance when we acquired her from another operator reflected her new life in the European Waterways fleet. The term Art de Vivre is almost untranslatable - “the art of living” is perhaps the closest in English, or maybe just “style” - which is also the meaning of the name of the newest barge in our fleet “Panache”!

“L’Impressionniste” is a nod to that great school of French artists, many of whom used the waterways to create their images of reflected light. Each cabin is named after one of these master painters. Other names are more straightforward. “Scottish Highlander” is named with pride as the only hotel barge cruising through the land of Rob Roy and Bonnie Prince Charlie.

“Rosa”, our Gascony barge, took her name from her home port, Toulouse, whose iconic pink brick buildings caused the city to be dubbed “la Ville Rose”. In fact, a dictionary is often helpful to understand the meaning behind many of the names. “Clair de Lune” means “moonlight”, “Nymphea” means “waterlily” and “Enchanté” is the welcome greeting you will get from most French people when you are introduced, meaning “delighted”. In Italy “La Bella Vita” just means “the good life” - which is what we hope you will experience when you cruise on any of our floating boutique hotels.