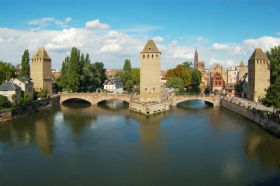 From majestic castles to the latest in green tourism, Alsace has activities, events and sites that attract a multitude of international tourists. A region known for its outdoor adventure sports as well as its rich historical and cultural offerings; Alsace can be enjoyed year round. Accessibility to the region is continually being improved to help support tourism and businesses in the area.

Alsace is served by two international airports; one is in Strasbourg, the other is the EuroAirport Basel-Mulhouse-Freiburg. Strasbourg’s location on the Rhine makes it a busy port city, serving both industry and tourism. Alsace also boasts one of the most developed rail networks in the country. Touring the region by train or canal barge is easily accomplished.

The Canal de la Marne au Rhin connects Strasbourg along the Rhine River with Vitry-le-Francois on the Marne River, allowing boat travel to move between Paris and Alsace. An interesting trip over rugged terrain, the canal flows through four tunne 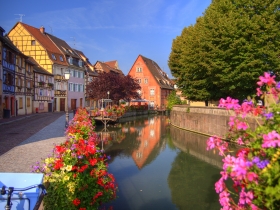 ls and uses the engineering marvel, the Saint-Louis-Arzviller Inclined Plane to speed travel. The inclined plane replaced the use of 17 locks through the mountainous region. An enjoyable way to depart from Strasbourg after touring the sites of Alsace, taking a canal barge on the small waterways enables the traveler to explore the beautiful countryside of this glorious region.

Bordering France and Switzerland, Alsace has a long and complex history of changing ownership, giving this small region a cultural complexity unlike most other regions of France. Although officially French speaking, the region transferred between Germany and France four times in recent history and there are many who still speak Alsatian, a German-based language. This cultural diversity impacts not only the language, but also the region’s architecture, wines, cuisine and religious affiliation.

Since the time of the Romans, A

lsace has been a center of wine production. Known for some of the finest Rieslings in the world, the area produces primarily white wines of German types. Varietal wines, those made from a single type of grape, are the predominant type made in Alsace. Touring vineyards and enjoying local wines with the generous portions of regional cuisine, is a favorite activity.

Travelers seeking cultural and historical activities have over 250 museums to explore, ancient villages to stroll through and world famous cathedrals to visit. The city of Colmar, founded 1,200 years ago, is a magnet for tourists seeking historic landmarks. Both religious and secular architecture survived the many wars that devastated much of the continent. The dual influences of French and German heritage are reflected throughout the town. Beautiful timber framed houses and businesses stand beside gracious churches, some dating to the 13th century.

Within Alsace, you’ll find the richest concentration of castles in Europe. Many are in a state of ruins, making picturesque sites for an afternoon outing. Sobering 20th century history can be seen along the Maginot Line, with its fortifications and at the only concentration camp on French soil. Art, music, dance, fabulously rich cuisine and local wines are abundant, providing the traveler with gracious enjoyment while discovering the rich history of the region.