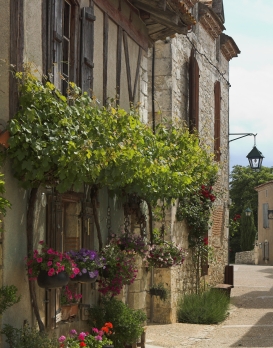 Burgundy is one of France’s most famous regions. But there is much more to Burgundy than wine—although a tour of the magical and seemingly endless vineyards should be at the top of your itinerary! There are many wonderful things to explore in this famous region, from the Burgundy canal to the other famed provinces in this region—from Beaune to Dijon, your time in Burgundy will be a delight!

Burgundy is located in the western portion of the country. It is a region steeped in history and culture, as famous for its sites and castles as it is for its wine and cuisine.

What makes Burgundy such a lush an physically beautiful area, as well as on of the world’s top wine producing regions is the Burgundy canal, also known as the Bourgogne Canal or the Canal de Bourgogne, which extends through 150 miles through this region. The Canal de Bourgogne is one of the most popular waterways in France and is favored for leisure cruising among the French, as well as tourists from other countries. Another beautiful canal to explore in Burgundy is the Nivernais Canal.

Burgundy is a region that is filled with canals, rivers and picturesque waterways, making it one of the most fertile areas in France. The Burgundy canal connects the rivers Yonne and Saône, allowing ships to navigate between northern and southern France. The Burgundy canal, is an impressive construction—it is 400 kilometers long with a total of 209 locks, and took 72 years to build, being completed in 1832.

Dijon is one of the main cities along the Canal de Bourgogne, and a city that you won’t want to miss during your trip to the region. Dijon is one of the few cities in France with a harbor, as well as other beautiful sites to take in—and a sampling of its famous mustard is a must!

Historically these have been important waterways for commerce, but they are now used for leisure boating as well. The Burgundy Canal is popular waterway for leisure cruises 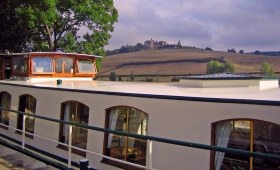 A barge cruise in Burgundy is an exquisite way to spend a holiday. You can take a day trip on a river cruise, or stay on a fully crewd hotel barge, your home way from home. For information on a luxury barge and riverboat holidays in France contact the Barge Connection, to plan your magical Burgundy getaway.