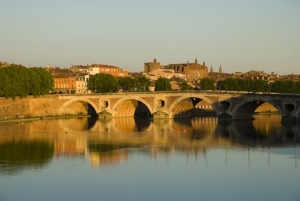 The first fingers of dawn kiss the bell tower of the Basilica of St. Sernin, coaxing a faint pink glow from its brick façade. As the sun arcs across the sky, the cathedral and its host city of Toulouse take on a warm rosy hue that deepens with each passing hour. Dusk brings an ethereal glow, a welcoming warmth emanating from structures built centuries ago. Such is life in Toulouse, the famed Pink City of France.

Putting the Pink in Toulouse 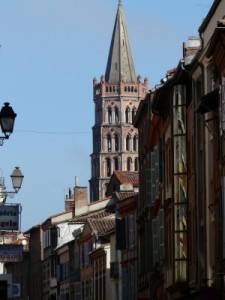 The Romans, Turks, Basques and the Celts are just a few of the civilizations that made their mark on Toulouse. Originally called Tolosa, the city was founded at a convenient crossing point on the Garonne River. One of the earliest uses of the pinkish clay brick is in the Vomitorium, a Roman-styled passageway in an amphitheater dating back to the first century.

As the centuries passed, and Toulouse changed its name and its rulers walls went up and the city grew, eventually becoming the capital of its own county in the 9th century. Toulouse was technically part of France, but tended to run its affairs independently. The construction of the Basilica of St. Sernin began in 1080, again using the same clay-pink bricks, an unusual material for a cathedral. Centuries later in 1750 the Capitole de Toulouse, originally built in 1190, was redesigned. The Neoclassical style building and its square carried on the “pretty in pink’ tradition. 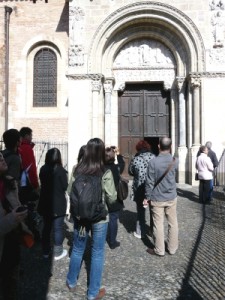 What to See in Toulouse
The logical place to start is with a guided walking tour of Toulouse. That way you’ll get your bearings and view the city through the eyes of a local. Get tips on where to dine, where to sip the finest wine, even the best place to watch your first pink-tinged sunset. After that, strike out on your own in this captivating, pedestrian-friendly city.

The Basilica of St. Sernin and the Capitole should be on your to do list. Add to this the Pont-Neuf, dating back to 1626, the oldest bridge that crosses the Garonne River. The Canal du Midi was completed in 1681 and created a shortcut between the Mediterranean Sea and the Atlantic Ocean. This not only saved time but helped ships avoid Barbary pirates that plied the waters around Spain.

Today the canal and its lock system are a tourist attraction, drawing boaters, fishermen

and acting as a liquid waterway for some of Europe’s most luxurious hotel barges. The Barge Connection operates two barges, the eight-passenger Rosa and the six-passenger Saint Louis and offers cruises along the Garonne River, beginning and/or ending in Toulouse. 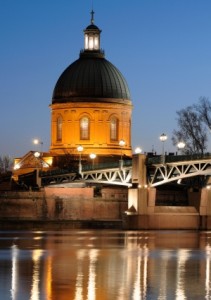 Museums Celebrating Art and Science
Museum buffs, indulge in a visit to the Ausgustins Museum, housing works from famed Italian and French artists including Toulouse-Lautrec, born in nearby Albi. This post-impressionist artist studied under Leon Bonnat and Vincent Van Gogh and is known for his portraitures. Les Abattoirs, famed for its collection of modern art and the Toulouse Museum of Natural History featuring its own flying quetzalcoatlus dinosaur skeleton, are not to be missed.

Toulouse also made its mark in the field of aviation. This is the birthplace of the Concorde, the only commercial aircraft, so far, to fly faster than the speed of sound. That’s better than Mach 1 to you aviation buffs. Airbus, the firm that built the Concorde and still produces planes for carriers around the world, offers guided tours of its facility. Cite de I’Espace is another aviation/science attraction, dedicated to the study of the universe and flights beyond the Earth’s atmosphere. 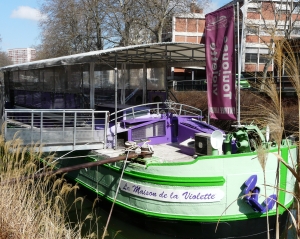 La Maison de la Violette is a revamped 1930s riverboat anchored on the Canal du Midi. The first thing you notice, even before stepping aboard, is an abundance of violet, both the color and the flower. The “Violet of Toulouse” is a registered trademark and these flowers have been exported since the mid 1800s. These delicate purple flowers are not only decorative; they are used in perfumes, teas, cakes, candies and other tasty treats.

On rugby day, everything else in Toulouse stops. What began in the late 1800s as a competition sport at schools and univer

sities gave way to the city’s Stade Toulouain rugby team. They took the championships in the 2010-2011 season and have a record four wins of the Heineken Cup. That is only a short list of wins for the team that plays at the Stadium Municipal de Toulouse. Rugby is a type of football, played without all the padding and equipment used in the American version.

Creature Comforts – Hotels and Dining
Accommodations in Toulouse range from well known, moderately priced hotel brands such as Best Western and Holiday Inn to luxurious French-flavored properties like the Grand Hotel de L’Opera. Located on Capitol Square, this property was once a 17th century convent. Today the hotel welcomes guests to stay in decadent rooms and suites, elegantly furnished in shades of red and gold. Dine under delicate chandeliers in the onsite restaurant, Les Jardins de L’Opera or relax with your favorite beverage in the Venetian inspired Grand Hotel de L’Opera Bar. 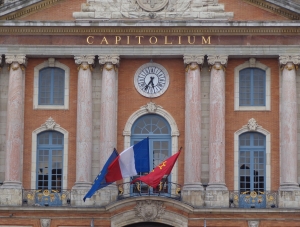 Across the street is the Crown Plaza Toulouse, a modern Five-Star property offering rooms and suites for business and leisure travelers. Dining in L’Autantic, the award winning restaurant overlooking the “pink city” is a memorable experience. The Grand Patio and Petit Patio offer al fresco dining, and the Plaza Bar entertains with live piano music along with its collection of wines and whiskies. Those wanting a room near the rail station will find the Pullman Toulouse Center a lovely choice. Hotel prices tend to be less than those in Paris.

Other dining options include 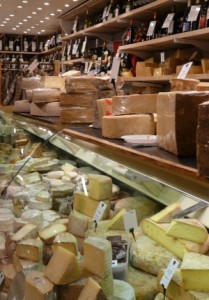 Emile, famed for their Toulouse style Cassoulet and duck entrees and Monsieur Georges, offering regional wines to go along with their locally influenced dishes. Both are close to the Capitol Square. You might consider a meal and a bit of wine tasting at Le Temps des Vendanges in the quartier Saint-Cyprien, or a visit to the Victor Hugo Market and their assortment of restaurants.

Getting to Toulouse
Blagnac International Airport is roughly 20 minutes from the Toulouse city center. Shuttle buses, leaving every 20 minutes, or taxis get you into town. Car rentals are available, but keep in mind that most streets in Toulouse are narrow and parking can be a challenge. If you do want a car, major brands such as Avis, Budget and Hertz are represented. Trains from Paris is another option with service from points throughout Europe.

Then again, you could just book a luxury barge vacation with Barge Connection, offering trips throughout France and other parts of Europe since 1998. Why not arrive in Toulouse thoroughly rested and content?