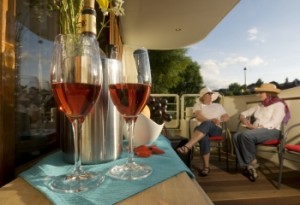 The fizz of the Champagne tickles your nose. The blood-red color of the Crème de Cassis de Dijon liqueur provides a richness to delight the eye and hint of sweetness to please the palate. This is the Kir Royale, a cocktail that originated in Burgundy, France. Located in the central part of the country, this region is a favorite of lovers of fine wines and delectable foods. Dijon mustard is one of the area’s specialties, as are Burgundy truffles. But it is the Kir Royale that is considered the royal drink of Burgundy.

What is Crème de Cassis?
Cassis is the French word for the black current. These dark, tart berries are crushed and

then soaked in alcohol for a minimum of three months. Then sugar is added to tame the tartness and give the liqueur a thicker consistency. To carry the name Crème de Cassis de Dijon, the berries used must come from the Burgundy area in France. The Briottet family has been making Crème de Cassis de Dijon since 1836. Other places that make Crème de Cassis include Anjou, France, Tasmania, the Province of Quebec in Canada and Luxembourg.

Kir – The Beginning
The original Kir used white wine. The drink was popularized and named after Canon Felix Kir, a Catholic priest that also had political aspirations. During World War II he helped more than 5,000 prisoners escape from a Nazi POW camp. Later, in 1945, Kir became Dijon’s mayor. During his term in office, he introduced visiting dignitaries to a drink that was then called Blanc-Cassis. It was a hit, and local vintners and liqueur producers benefited from the increased attention. Locals started referring to the beverage as the Kir. 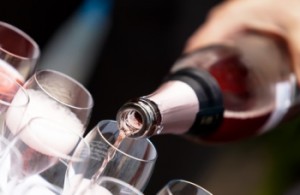 An Array of Kir Refreshments
The original Kir, mixed with chilled white wine, goes well with Comte cheese spread with blackberry jam. Kir Petillant is made with Cava or Prosecco instead of the white wine. Both are sparkling wines. The Cava originates from Spain and the Prosecco from Italy. Of the two, Prosecco tends to be sweeter. When Champagne, the real deal from Champagne, France, is used, the drink is called a Kir Royale. Adding a rich red Burgundy to the Crème de Cassis creates a Kir Cardinal, also called a Kir Communard. Burgundy has a bold, rich, flavor which further tames the sweetness of the cassis. 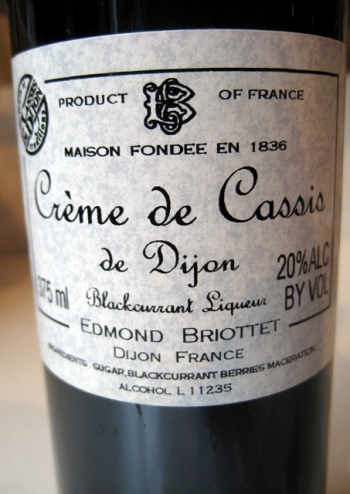 Crème de Cassis is also blended with a variety of liquors to create some creatively named cocktails. The Cassis Screwdriver adds vodka, orange juice, grenadine and lime juice to the mix. The Whammie, created in Texas and presumably named for what that drink can deliver, uses Crème de Cassis along with white rum, spiced rum, peach brandy, Crème de Banane, raspberry liqueur, orange juice, pineapple juice and grenadine. It’s served over ice in a 20-ounce glass. Do yourself a favor and drink it with a friend, or three. If you have a sweet tooth and calories don’t count, you might try a White Mess. Made with white rum, root beer schnapps, Malibu rum and heavy cream along with the cassis, the drink goes down smooth and tastes like a coconut filled candy bar.

More Crème de Cassis Delights
Crème de Cassis is an excellent addition to both savory and sweet recipes. Topping some pan-fried duck breasts with a cassis sauce adds sweetness to the dish. Just add water, salt and pepper to the liqueur and heat it before pouring. You may also add the cassis to other berry sauces for enhanced flavor. For example, a raspberry sauce with a hint of cassis goes well with chocolate mousse cake, or simply as a topping for vanilla ice cream. Make sorbets or stir the cassis into berries that will be used in a trifle. A trifle is a rather eye-catching dessert made up of custard, fruit and cake, all layered and topped with liberal amounts of whipped cream.

Canal Cruising Through Burgundy
One way to enjoy the delights of the Burgundy region is to take a luxury river barge cruise. 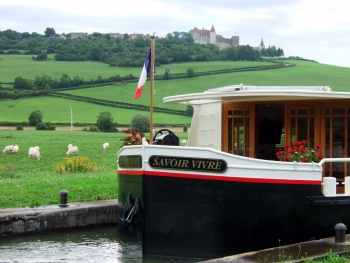 The Barge Connection has been introducing visitors to the region and its culinary delights since 1998. This relaxing way of travel takes you to half-hidden villages and historic sights. Sample your Kir Royale while comfortably seated on a barge deck chair.