Stately and sold, mysterious and majestic: the 37 bridges of Paris that span the Seine River are a mixture of architectural styles, symbolism and history. The 482-mile Seine River cuts right through the center of Paris from east to west, originating in the hills that surround Dijon, in southwestern France, and flowing to the English Channel at the port cities of Honfleur and Le Havre. Combining form with function, the bridges of Paris are impossible to ignore and difficult not to be enchanted by. Below are just a few of our favorites: 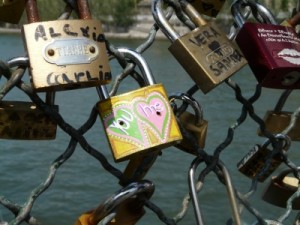 pedestrian-only span that runs from the Institut de France on the left bank to the center court of the Louvre Museum (once called the Palais des Arts, hence the bridge's name) on the right bank. This steel arch bridge was actually erected in the early 1980s after a barge rammed into the original, early 19th century bridge. However, the new bridge was constructed using the original plans, so it has lost none of its charm. This bridge is popular with lovers, and Parisians and visitors alike have covered the steel mesh links of the bridge with locks. The legend is that you carve your names on the lock, attach it to the bridge and throw the key in the Seine River as a symbol of your undying love. You may remember seeing this bridge in the last episode of "Sex in the City" and in the 2001 French film, "Amelie."

2. Pont Alexandre III. My favorite bridge in Paris, the Pont Alexandre III, connects Les Invalides and the Eiffel Tower area on the left bank with the Grand Palais on the right bank. This 353-foot single arch bridge is one of the most elegant and ornate in Paris. Opened in 1900 for the Universal Exposition, the bridge has two stone pillars with winged horses atop them on each end and a series of art nouveau lamp posts at regular intervals across the bridge. The view, crossing from the left to the right bank, is dramatic, with the Eiffel Tower in the distance.

3. Pont Neuf. Pont Neuf (literally "new bridge") is ironically the oldest bridge in Paris. Built between 1578 and 1607, the stone arch bridge is actually two bridges. Both sections of the 761-foot long span are located on the western end of the Ile de la Cite, one of the oldest areas in Paris and home to Notre Dame Cathedral and La Conciergerie. Seven arches connect the island with the right bank and five arches connect it with the left bank.

4. Pont d'Iena. This 508-foot arch bridge (the Jena Bridge) is a contribution from the 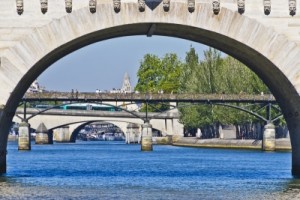 Napoleonic era, and connects the Eiffel Tower on the left bank with La Trocadero on the right bank. Named for the 1806 French victory at the Battle of Jena (in Prussia, now Germany), the Pont d'Iena opened in 1814. The sides of the bridge are decorated with imperial eagles (a favorite of the First Empire) and sculptures of French, Arabic, Roman and Greek warriors on the four pylons. The bridge was widened in 1937 in preparation for the World's Fair. The steps of the Pont d'Iena were featured in the 1985 James Bond movie, "A View to a Kill."

What is your favorite bridge in Paris? 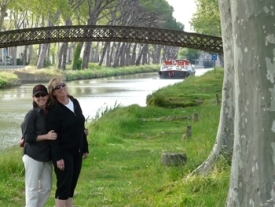 A Day at the Museum: Current and Future Exhibits i...
Cruising in Style on the Roi Soleil