Mar 10 Posted by Crystal Groome in Barge Cruises in France

Located in northeastern France along the Marne-Rhine Canal, the Arzviller Barge Lift is a unique feat of engineering that allows barges to easily cross the Vosges Mountain range that bisects the canal. This intriguing and scenic transportation system is a highlight of any barge trip to this part of France.

How the Arzviller Barge Lift works
The Arzviller Barge Lift uses a counter-balance system to raise and lower barges and otherlight water craft. When navigating this unique conveyance, the barge enters a caisson, a water-filled compartment, attached to a balancing car with a counterweight that runs along a track beside the canal. As the barge caisson displaces water in the canal, the counterweight moves, dragging the barge along the canal. In theory, the lift will operate correctly without using any engines. In practice, an engine is used to regulate the speed at which the craft ascends and descends the lift.

History of the barge lift
The Marne-Rhine Canal, which connects the Marne River (just outside of Paris) and the

Rhine River (at the French/German border) was constructed between 1838 and 1853. The Vosges Mountains, a small range of low mountains, cut right across the canal. Before the barge lift was built, horses and later rail cars and diesel trucks, used to drag barges up the steep incline through a series of locks. The process was very time and labor-intensive. One man was needed to operate each of the 17 locks and they lived in state-owned canal houses near the lock. These locks also used an enormous amount of water, often more than could be gotten from local rivers, ponds and streams. It was not uncommon for the locks to shut down during the hot summer months due to a lack of water.

The first barge lift at Arzviller was constructed in 1969 and replaced the 17 canal locks. It also reduced the time it took to navigate this section of the canal from an entire day to under a half-hour. In addition, with the barge lift, two barges can travel in opposite directions on the lift at the same time, something that was impossible with the traditional locks system.

Today, visitors can walk around the old locks and canal houses while their barge is waiting to be connect to the barge lift.

Fun facts
The Arzviller Barge Lift is a fascinating piece of machinery. Below are just a few facts about the lift:
- The barge lift can transport up to 39 barges each day.
- The lift is the most visited attraction in the Province of Lorraine.
- It takes 20 minutes to complete the barge lift, just 4 minutes of which is actual travel time.
- Before the barge lift was built, traveling the entire 314 kilometer length of the canal took an average of 6 to 9 days.
- The barge lift travels 146 feet vertically and 356 feet horizontally.
- Originally, two caissons were planned, but only one was built due to a decline in merchant business on the canal.
- Since 1969, pleasure barge traffic has largely replaced merchant traffic on the Marne-Rhine Canal.
- There are two concrete counterweights, each weighing 450 metric tons. 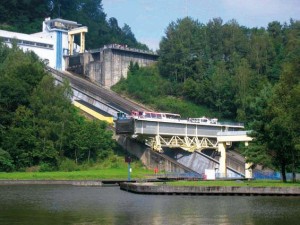 Marne-Rhine barge cruise
Traveling on the Arzviller Barge Lift is just one of many interesting sights on a Alsace Canal barge cruise. The Province of Alsace, at the eastern end of this journey, features the historic Gallo-Roman town of Saverne, a chance to sip the outstanding Rieslings of the region and the picturesque, half-timbered houses and outstanding sausage dishes of Strasbourg.

This blog was brought to you by The Barge Connection. Founded in 1998,

specializes in matching clients with the barge cruise best-suited to their budget, lifestyle, interests and travel experience. We handle all of the travel details, from transportation to the barge cruise to pre or post-cruise hotels and excursions. Visit our Website or give us a call. We would love to share our knowledge of barge vacations with you.