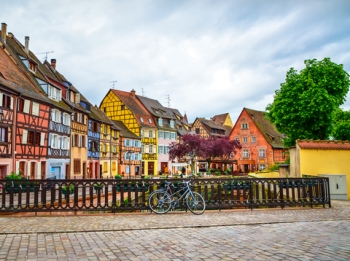 Paris is France’s famed cultural and metropolitan core. Venturing beyond the City of Lights takes you into the country's distant and not so distant past. Sample fine wines and regional dishes as you explore these 21 regions, each with a history and flavor of its own.

Alsace
This sliver of land bordering Germany and Switzerland is so prized that in the last 2,000 years it’s had 17 changes of ownership. The near-constant need to defend its borders left behind an assortment of forts, castles and medieval villages, all virtual historic time capsules. In the modern age the concentration is on great food and locally produced wines. The Alsace is second only to Paris in the number of restaurants carrying the coveted Michelin stars.

Aquitaine
On the south-western edge of France, fronting the Atlantic Ocean and sharing a border

with Spain, the Aquitaine is a draw for beach lovers, surfers and those who enjoy exquisite wines. It is the third largest region in France and home to the Lascaux cave paintings, prehistoric masterpieces that are a UNESCO World Heritage Site. The Pyrenees National Park and the Gironde area estuaries are popular with residents and tourists alike.

Auvergne
The Auvergne is of volcanic origin with the Puy de Dome as its centerpiece. From the mountain’s top, visitors look down at more than 80 volcanic domes and craters. Vulcania is a local theme park combining geological science with an animal park. Auvergne is dotted with castles and chateaus, some offering overnight stays. The volcanic soil creates mineral rich waters, giving rise to the town of Chaudes Aigues and its decadently refreshing spas. 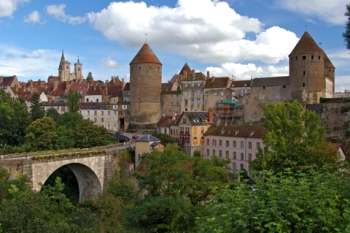 Burgundy
This is the home of that deep rich red wine of the same name. Located in the center of France, Burgundy produces and markets some 200 million bottles worldwide every year. The Burgundy Wine Roads is the ultimate wine tasting tour, stretching along a 100 km route. The region is also known for Burgundy truffles and Dijon mustard. Rivers and canals create more than 1,000 km of waterways connecting towns and historic sites.

Brittany
Located on a peninsula that juts out between the Atlantic Ocean and the English Channel, Brittany has its own Celtic flair. Ancient walled cities face the sea, quaint fishing villages still ply their trade and near-deserted beaches welcome visitors. Golfers find uncrowded links, while spa lovers indulge in holistic seawater treatments at first rate resorts. Music lovers rejoice, this is one of France’s go to places for festivals including Les Vielles Charrues and La Route du Rock in St-Malo. 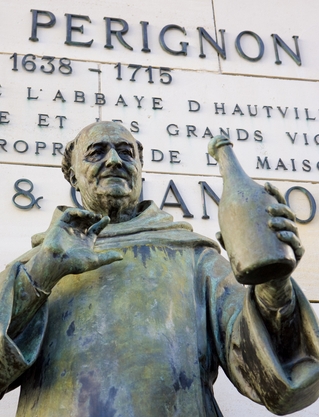 region is not only the origin of Champagne; it also boasts literary and artistic talents including Renoir, Voltaire and Rimbaud. The signing of the Declaration of Surrender by the Germans in this region ended WWII, further cementing the area’s place in European history. The wildlife rich area is home to lakes, the French Ardennes’ forests, vineyards, and river valleys, all connected by cycling paths and/or tranquil waterways.

Corsica
Corsica is an island paradise surrounded by the waters of the Mediterranean Sea. It was originally named Kalliste by the Ancient Greeks. The word means “most beautiful” and with its combination of towering cliffs, white sand pocket beaches and forested mountains, it is an apt name. Roughly two thirds of the island belongs to the Corsica Regional Natural Park. Fresh seafood is prized, as are dishes with Italian influenced names such as Coppa, a dried sirloin and Figatellu, a liver sausage. Corsica is a blend of cultures, evidenced not only in its food, but in its language and cultural arts.

Franche-Comté
Franche-Comté on the eastern end of France is home to three UNESCO World Heritage Sites. Tour the Citadel of Vauban in Besancon, the Arc et Senans’ Royal Saltworks and Le Corbusier’s chapel of Ronchamp. The Doube and Saone Rivers both run through the region, offering the chance for barge cruising, cycling, hiking, and in some parts running white water rapids. The Vosges and Jura mountain ranges provide a scenic backdrop for enjoying Jura wines and Comte cheese.

Languedoc - Roussillon
Fronting the Mediterranean Sea on the south-eastern edge of France, Languedoc-Roussillon is known for its sun-washed beaches and historic villages. The region has a dual identity as well as dual names, influenced by the Catalan culture of north-eastern Spain. The wine in this region, grown on vines stretching from the seaside to high in the sculptured hills, is one of the oldest in the world. With roughly 300 days of sunshine per year, these are happy grapes and it shows.

Limousin
Limousin is in the heart of France and home to the Millevaches en Limousin Regional Nature Park. Hiking trails and horseback riding paths offer the chance to discover the wilder side of France. The Dordogne River is perfect for canoe paddling or fishing. Golf courses abound, allowing visitors to tee off in a natural setting. It is also home to Limoges, famed for its porcelains and enamel creations. 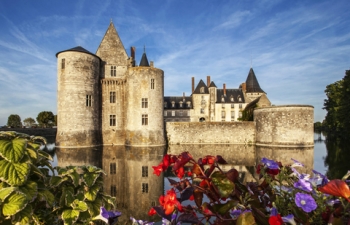 Loire Valley
The entire Loire Valley is listed as a UNESCO World Heritage Site. It is a cycler’s paradise with the Loire a Velo trail, following the Loire River, leading visitors through manicured gardens, vineyards and quaint villages. The Loire Valley is known for its signature wines including Vouvray, Sancerre and Chinon. Various French kings were enamored by the region, leaving behind magnificent residences and soaring cathedrals, the perfect backdrop for a picnic along a quiet riverbank.

Lorraine
Bordering Belgium, Luxumborg and Germany, Lorraine is steeped in European history. Memorials honor those that fought at the Battle of Verdun in World War I. Explore the Baccarat Crystal Museum and the Place Stanislas, a royal square that’s a designated UNESCO World Heritage Site. This is the birthplace of Quiche Lorraine, that rich, creamy egg tart. The local Mirabelle plum is used in crafting some memorable brandies.

Midi-Pyrénées
The largest of France’s regions, the Midi-Pyrénées borders Spain and is home to the Pyrénées National Park and the Millau Viaduct, considered the highest and longest bridge on the planet. The city of Toulouseis the birthplace of Toulouse-Lautrec and home to the Airbus aircraft manufacturing plant. Regional specialties include Armagnac brandy, Madiran wines and Roquefort cheese. The region is also home to Lourdes, a famed pilgrimage site, and the prehistoric cave paintings in Ariege.

Nord Pas-de-Calais
Bordering Belgium, the Nord Pas-de-Calais region was a prime battleground during both World Wars. Towns like Calais, Dunkerque and Cambrai have memorials dedicated to those that fought in the conflicts. Today the capital town of Lille offers a host of shops, restaurants and museums. The family friendly region is known for its beaches, an assortment of beers and an eclectic offering of seafood, cheeses, fine chocolates and a potent juniper brandy. 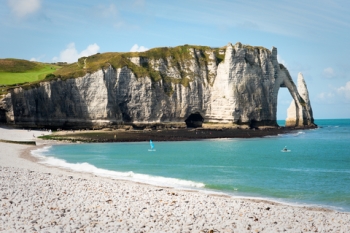 in that conflict. Memorials and museums are found in towns like Dieppe and La Manche. This is also where Impressionism was born, a colorful, fluidic art form perfected by masters such as Monet. Normandy hosts an Impressionism festival each year, the perfect place to sample cheeses such as Camembert or Neufchatel.

Paris / Ile de France
Paris draws those seeking romance, beauty, history and sophistication. Parisian bistros, sidewalk cafes and five-star restaurants offer the best wines and foods imported from throughout France. Walk in the footsteps of Gauguin, Van Gogh and Matisse, all artistically influenced by the Parisian magic. With 145 theaters, 157 museums, more than 1,800 monuments and world class shopping, Paris has plenty to keep its visitors and residents suitably entertained.

Pays de la Loire
Located on the Atlantic Ocean in northwestern France, Pays de la Loire is home to Le Mans and its annual automobile race. The capital is Nantes, birthplace of Jules Verne of “20,000 Leagues Under the Sea” fame. Located on the Loire River, Nantes was once a key trade port for goods coming in from the West Indies and Africa. The medieval town of Gerande is famed for having its formidable fortress, including the impressive Saint-Michel Gate, standing intact.

Picardy
Located on the northern end of France, Picardy is known for its parks and gardens. More than 70 are open to the public. Museums and monuments are dedicated to the battle of Sommes, fought during World War I. Trails attract hikers of all skill levels eager to do a bit of good old fashioned rambling. Gothic architectural wonders, such as Amiens, France's largest cathedral and Beauvais, the country’s tallest, are both found in Picardy.

Poitou-Charentes
Bordering the Atlantic Ocean, the Poitou-Charentes region is blessed with sandy beaches and stunning limestone cliffs. This is Cognac country, producing one of the world’s most cherished brandies. Decadent vacation barges ply the many canals, taking visitors from one quaint village to another. La Rochelle, one of the larger coastal cities, is home to a state of the art aquarium, museums and hosts a number of annual festivals. 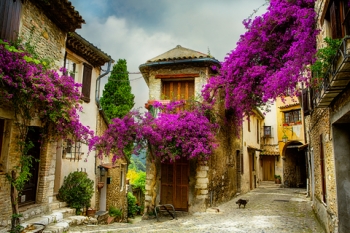 Provence-Alpes-Côte d'Azur
Provence-Alpes-Côte d'Azur is bordered by the Mediterranean Sea to the south and the Southern Alps on its northern edge. The Roman influence is evident, accented by the recent discovery of a 2,000 year old bust of Caesar in the Rhone River. Famed cities include culturally diverse Marseille and Provence, known for its antique trade and lavender oil production. This is the home of Bouillabaisse, a rich seafood stew, and wines from the Cotes du Rhone and Cotes de Provence.

French Riviera
Sporting France’s second largest airport, 120 km of sun-washed Mediterranean coastline and a string of quaint hill towns, the French Riviera is a dream vacation destination. This is the home of the Cannes film festival, drawing celebrities and fans from around the globe. Famed artists such as Picasso, Monet and Renoir spent time along this coast, putting brush to canvas and immortalizing their visions of French Riviera life. 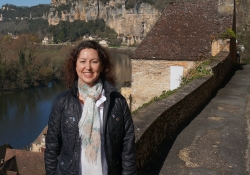 Discover the many regions of France while soaking up the sun and sipping fine wines aboard a luxurious barge cruise. The Barge Connection, founded in 1998, specializes in cruising these hidden, and perhaps not so hidden, waterways.