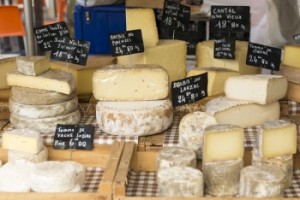 The term "follow your nose" aptly applies to some of France's most aromatic cheeses. Brave the olfactory adventures and enjoy some of the country's best loved creations, with a glass of wine of course.

Here is a list of some famous stinky cheeses from France.

Vieux Boulogne – Boulogne sur Mer
Vieux Boulogne, originating in the Boulogne sur Mer region, constantly vies for the top spot on “stinkiest cheeses of the world” lists. In 2004 scientists at Cranfield University gave this cheese top honors. Rumor has it that the scientists used an electronic nose for the judging. It seems that a simple human nose evaluation was out of the question. We are talking scientists after all. Those that get past the uric acid, ammonia based odor find that the flavor is mild. Beer is used to wash the rind and the cow’s milk cheese ages for between 7 and 9 weeks.

Pont I’Eveque – Normandy
Pont I’Eveque, from the Normandy region, is also a constant competitor for that top stinky 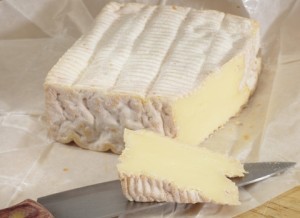 spot. The cheese dates back to the 13th century and is one of the oldest types of cheese on the planet. This fact opens up the floor to jokes about smelling of old socks and the like, not totally unjustified. Some have equated the aroma to marsh gas, the aromatic scent experienced at a very low tide. The good news is that most of the smell is in the rind, so all you need to do is find a brave soul to carve it off. Then enjoy the slightly buttery taste. Pont I’Eveque is made from cow’s milk, washed in brine and ages roughly 6 weeks. 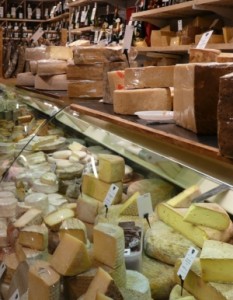 Camembert de Normandie AOC – Normandy
Camembert is one of the most well known cheeses of France. But Camembert de Normandie is not the same as what’s found on many American supermarket shelves. This variety dates back to the French Revolution, is made of unpasteurized cow’s milk, aged a mere 21 days and has a thicker rind than most cheeses. The smell comes from the rind, which is where the ammonia is found. As the cheese ages it becomes even more aromatic. This is a runny cheese, perfect for spreading on crackers or crusty bread, if you can get past the “week old pair of dirty socks in closed room ” aroma.

Munster – Vosges Mountains
Aged for up to three months in a dark, damp cellar, Munster is aromatic from the time it emerges from its subterranean home. It’s made of raw cow’s milk, washed in brine and has been likened to sweaty feet in the smell department. Munster is made with or without cumin seeds and has a stronger flavor than most rind-washed soft cheeses. Consistency varies, with the older cheeses being hard on the inside, suitable for slicing. The rind is thick which diehard fans may eat but others are just as happy to peel off. 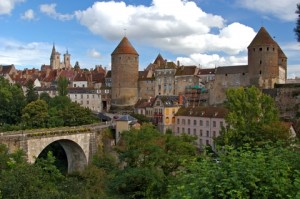 Epoisses de Bourgogne AOC – Burgundy
Rumored to smell like an unwashed skunk, Epoisses is so smelly that it is not allowed on public transport anywhere in France. It comes from Burgundy, the same area that created the Burgundy wine enjoyed around the world. While the wine is most welcome, the cheese, well, not so much. It’s made from raw cow’s milk and then ripened using pomace brandy. Epoisses is a runny cheese and aged for between 4 to 6 weeks. As it ages the smell of ammonia increases until finally even diehard fans will run. Just as well, at that point it’s not edible.

Roquefort AOC – Roquefort
Roquefort not only has the smell factor to consider, it has a bit of a mold problem. Well, 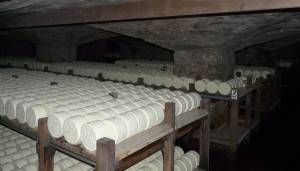 problem for some. Authentic Roquefort is made from unpasteurized sheep’s milk and aged in damp caves found around the village of the same name. Slice into a wheel of aged Roquefort and not only will your nose be assaulted by the pungent smell, your eyes will behold a paisley print of bluish-green mold. Some won’t even taste the cheese after getting a look at all that greenery. Despite the odor and the mold, Roquefort is often considered the “King of Cheeses” in France and beyond. It is often used on salads, either crumbled on top or made into a dressing.

Are you brave enough to sample some of France’s most pungent cheeses? Why not take the plunge among friends? Take a barge cruise with Barge Connection, specialists in plying the waterways of France since 1998. Get comfortable on deck with your fellow cruise mates, indulge in a glass of wine and take the aromatic cheese plunge.