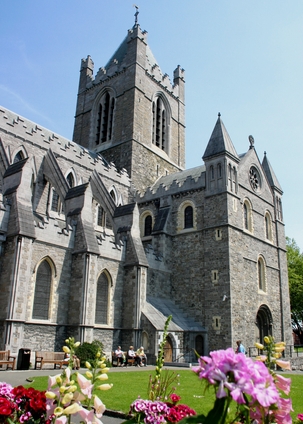 Cead mile Failte! One hundred thousand welcomes! Tis’ a phrase you’ll hear quite often in Dublin, a city once ruled by kings and now one of the most cosmopolitan gathering places in Europe. Writer’s are revered, poets are cherished and publicans are well looked after. Trinity College houses some of Ireland’s greatest and most ancient treasures, while at the same time educating some of the world’s youngest and brightest. All that mind work requires a bit of down time. In this fun city, it’s easy to find a pint and a story and a pal or two to share them with.

City Sightseeing on Dublin’s Double Decker Buses
One of the best ways to get your bearings in Dublin is to hop on one of the double-decker buses that circle the city. A two-day pass will give you on and off privileges so if you see something you like, just get off at the next stop. A tour guide will point out must see spots such as Trinity College or St. Patrick’s Cathedral, not to mention directing you to one of the many pubs. Buses even take you to the Guinness Storehouse where you can sample some of Ireland’s finest brown stout. Try and sit on the open-air upper deck, but be sure you have a raincoat or at least a hat in case a “soft rain” starts falling. That’s the Irish euphemism for raining but not exactly a storm. Frequent “soft rains” keep those 40 shades of green lush and healthy.

Guinness Storehouse
The Guinness Brewery has been producing its rich, dark stout since 1759. The Guinness Storehouse, once housing grain, is the only part of the St. James Brewery that is open for visitors. The building is seven stories tall with the Gravity Bar on the top floor. Relax in this glass enclosed bubble with a pint of Dublin’s best while taking in the panoramic views of the city. Stop off at the fourth floor and visit the Perfect Pint Bar. Get hands on exper

ience in pouring your own pint of Guinness. Learn how the beer is made and how it is transported the world over. Visit the store for some creative souvenirs, including a personalized bottle of Guinness. You might even find your family crest or a genealogy certificate outlining your ancestry. Guinness is strong stuff, so it’s best to use the sightseeing bus already mentioned or grab a taxi for your brewery visit.

Dublin Literary Pub Crawl
Dublin loves its writers, and its pubs. The Dublin Literary Pub Crawl offers the best of both. Hear tales of Oscar Wilde, the famed playwright that was every bit the character that his name implies. George Bernard Shaw, WB Yeats and James Joyce, author of “Ulysses” are all favorite sons. Poets like Sean O’Casey and Eavan Boland also get the nod. But this is a liquid history lesson. As you walk through the cobblestone streets near Trinity College you’ll sample the wares of vintage pubs like McDaids, Doheny & Nesbitt and O’Neills. The latter pub, in business for more than three centuries, is within steps of the famous statue of Molly Malone, a lass forever immortalized in song. Your guide, or any of the locals, will fill you in on the statue’s not exactly “G-rated” nickname. 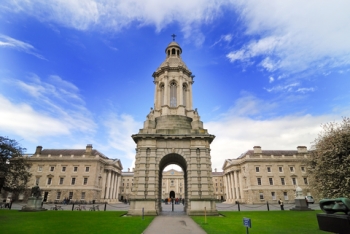 Trinity College and the Book of Kells In many ways Trinity College is reminiscent of universities around the world. Students spread out on velvet lawns on sunny days, crowd nearby cafes and rush from one class to another on a campus that covers a good bit of central Dublin. The difference is that Trinity was founded in 1592. Though the original intent was to educate the upper classes, Ireland’s largest and oldest university now welcomes students from around the globe. Literary greats such as Oscar Wilde, Samuel Beckett and Bram Stoker, famed for his “Dracula” novel, are all alumni. Wander past buildings that date back to the 17th century, through manicured gardens and along age-old cobblestone streets.

Don’t miss seeing the Book of Kells, an illuminated manuscript dating back to the ninth century. The hand-drawn book is in the Trinity College Old Library, along with other rare books of Irish and Celtic history. After all this wandering around you might be thirsty. Not to worry, several pubs are nearby. Settle in with a pint and enjoy a bit of Irish music and good old-fashioned “craic.” That’s storytelling by the way, an Irish talent if ever there was one.

Viking Splash Tours
What do you do with a vintage World War II amphibious vehicle in Dublin? You paint it a screaming yellow and offer tours of the city from a totally different perspective. Viking Splash Tours now has six of these DUKW vehicles in a rainbow of colors, able to traverse the streets of Dublin and then splash into the River Liffey for a scenic mini-cruise. Rain or shine the “ducks” as these vehicles are sometimes called cruise past Trinity College, St. Stephen’s Green and go for their swim on the Liffey. Rain slickers are provided on those “soft rain” days. Chances are a bit of the back splash will freshen up your face and have you giggling, not only at the lilting tour dialogue but at the sheer absurdity of it all.

How about spending some more time cruising the waterways of Ireland? The Barge

Connection, a staple in European Barge Vacations since 1998, offers cruises on the Shannon Princess, a hotel barge that plies the River Shannon. Pick up is in Dublin and the week-long cruise takes you from Quigley’s Marina to Killaloe in the very heart of Ireland. It’s a relaxing way to see just how many shades of green Ireland really does have, one lazy bend in the river at a time.